Archive for the ‘Honda Pilot’ Category 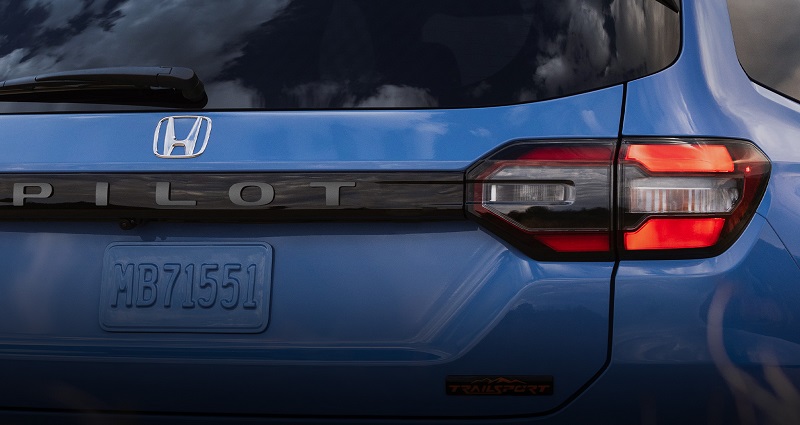 The 2023 Honda Pilot is coming soon to West Burlington IA. The most rugged SUV ever boasts a powerful V-6 engine and a more rigid frame for improved handling. Complete with a fearless TrailSport edition with all-train tires, skid plates, and an off-road tuned suspension system, the 2023 Honda Pilot is as capable as they come. Contact our sales team today and we’ll let you know all about the 2023 Honda Pilot, including details on when it will arrive and the price to take one home. Call, email, or visit our sales team at Brad Deery Honda serving West Burlington today. Also serving Iowa City, North Liberty and Davenport Iowa.

Honda’s Pilot is there for families through the memories they make. It’s a part of the family and in some ways the head of household. When kids need a ride to sporting events, they’ve got a second row that converts into their own private space. The driver gets power adjustable seating, and sometimes even the passenger has power adjustment. The powerful 2016 Pilot rated at 280 horsepower from an award-winning 3.5L V6 engine that still gets praise today from anyone who owned it. Honda Sensing came along in this generation and transformed the way it felt to drive a Honda in general. The Pilot was particularly responsive to Honda’s intelligent safety tech. Fairfield drivers have peace of mind with features like Blind Spot Monitoring, Lane Detection, and Automatic Emergency Braking. There’s a lot to love about every generation of used Honda Pilot for sale near Fairfield, and you can learn all about those great qualities of the Pilot in our Brad Deery Honda review. Also serving Muscatine, Washington and Coralville, Iowa.

There’s always a better way to do things. That’s why you’re shopping for used vehicles for sale near Davenport. As new models fell behind on adding features we’d already known and loved for years, it took the auto industry a minute to catch up and adjust. Buyers adjusted, too. Now buying used is as normal and common as buying new. It’s not even about how much money a buyer has anymore. It’s about the common sense buy of paying less down and less per month for models like a used Honda Pilot.

The Pilot doesn’t have a pure SUV look, and that’s a good thing. Its shorter nose takes some of the weight away from the model and gives it a higher degree of handling than other bulkier SUVs. It’s not a small model, either, though, so you get a real SUV interior that gives your family a spacious place to enjoy life together. Seating is set up so that the model’s windows are more visible. This is one of those SUVs you never have to dread backing up somewhere.

Techies are going to love the last two generations of the Pilot. Honda was one of the first automakers to adapt smartphone technology to the interior of your vehicle. The touchscreen design in a Pilot comes without physical controls, so it’s very much like using a touchscreen smartphone. Honda got better at their designs over the years, but even their first connected devices inspire confidence in users who might not be familiar with this kind of interior feature. In addition to expert touchscreen design, Honda added Bluetooth, Wi-Fi, USB ports for charging, and even wireless device charging earlier than other automakers. You can get a lot of tech in a Pilot.

The Honda Sensing system comes even on most used Honda Pilot models. If this is a very important feature for you to find for sale near Davenport, be sure to ask us which Pilot models have things like Driver Attention Alert and Lane Centering. We recommend speaking to your Brad Deery Honda sales associate about this platform if you’re intent on owning it. We can show you the models that have your must-have safety features installed.

More modern used Pilot vehicles will have a 6-speed automatic transmission. It’s standard in even base models, so you don’t have to pay extra to get automated gears. Your transmission is the second component of your vehicle to deal with power, so make sure the transmission handles your SUV well. The Pilot is a choice that gives this feature built into every single one of its models you see for sale near Davenport. You can really test the waters of the Pilot’s transmission during a test drive.

Join the Lines of Used Buyers this Year

People are lining up to get the Honda Pilot at Brad Deery Honda. We have this model almost every day of the year because it’s one of Honda’s claims to fame. People have loved the Pilot since it was first released, but it has been especially popular over the last half decade of models. Why do people buy a used Honda Pilot for sale near Davenport?

Do you want to test drive one of our Pilot trims? Please get ahold of us as soon as you can to schedule or stop by the dealership when you’re nearby. You’ll have your choice of which Pilot models to take out on the road for yourself. If you’ve got more questions about the Pilot’s wonderful quality, a sales team member is happy to answer your questions now. Also serving Muscatine, Washington, Fairfield and Coralville, Iowa.

Come to a dealership near Monmouth to marvel at the aggressiveness of the exterior of the Honda Pilot. This SUV has 18.0-inch or 20.0-inch wheels under the body, depending on if you upgrade or not. The standard headlights are LED, as are the brake lights in the back. The roof racks on top of the SUV let you bring additional cargo. Finally, there is one form of the Honda Pilot called the Black Edition that offers blacked-out detailing. You will find dark accents on the front grille and fascia. Also serving Iowa City Iowa, Macomb, Galesburg and Monmouth Illinois.

The 2022 Honda Pilot is a cross between a minivan and an SUV. It is built on the Honda Odyssey minivan platform, but it has a more practical interior and the features you expect from an SUV. It includes all-wheel drive, chassis, and mechanical systems built for rugged terrain. The outward appearances are bold and sophisticated, with an aerodynamic design that enhances fuel efficiency. The interior is comfortable and includes features, such as heated and ventilated seats, one-touch power moonroof, and tri-zone climate control to keep everyone comfortable. When it comes to tech, the Honda Pilot includes wireless charging and a Wi-Fi Hotspot. The information in this article is only for general purposes and does not reflect the features of a particular vehicle in stock. If you would like information on one of the fine vehicles in our inventory, you can contact our team at Brad Deery Honda serving Monmouth for more information. Also serving Keokuk, Muscatine and Washington Iowa.

Brad Deery Honda serving Keokuk is home to every type of imaginable Honda vehicle, and we’re not shy about screaming that from the rooftops. When you do something right, you’ve got a right to be proud of it. Our used Honda Pilot inventory is serving Keokuk with an affordable dose of luxury and family time each and every year. We’ve got the model going all the way back to the first-gen Pilot trims in 2003. As a longstanding feature of any American road, the Pilot continues to age finely and offer up multiple reasons to buy. Created with a unibody build and strong V6 engines, it’ll always give you the confident driving performance that you deserve. We are serving West Burlington, North Liberty, Cedar Rapids, and Davenport Iowa.

The Honda Pilot is a bold, aggressive SUV that knows its place in the grand scheme of things. It has a “big” look and a soft side on the inside. Perforated leather interior seating is standard on higher trims and available in used vehicles as well. In fact, shopping used means getting “new” features for free. You’ll never pay a dime to add on anything because on used vehicles, every feature is in the bottom line price. Our dealership serving Davenport welcomes you to explore the Honda Pilot today. We are serving West Burlington, North Liberty, Cedar Rapids, and Davenport Iowa.

Do you crave the style and space of an SUV, but secretly wish you had the space for people and things that a minivan offers. If so, you can drop the SUV guilt and indulge yourself by choosing the Honda 2022 Pilot. The stylish pilot has an aggressive stance on the road, is loaded with features and technology to keep young and teenaged passengers busy for hours with cargo room that isn’t common with mid-size SUVs. What this means is you don’t have to trade in style and better handling to gain access to a roomy interior. With the 2022 Pilot from Honda, you’ll get everything you need and don’t have to worry about carrying the cultural baggage that comes with owning a minivan. Other SUVs in the same market compare in many ways but don’t offer the comfort and space of the Pilot. To learn more about the 2022 Honda Pilot vs 2022 Nissan Pathfinder, contact Brad Deery Honda. Our team can go over the details of the 2022 Nissan Pathfinder and Pilot to show you how they compare and help you determine which one meets your needs best. We are serving West Burlington, North Liberty, Cedar Rapids, and Davenport Iowa.

The 2022 Honda Pilot is one of the safest three-row SUVs for you and your family. You can take this vehicle anywhere you want to go and still feel safe, knowing there are overhead airbags for every passenger and front airbags for the driver and passenger. Not only are there plenty of included features like airbags, but there are also safety technologies in place even on the base model of this SUV. These include collision alerts, blind-spot monitors, rearview cameras, cruise control, cross-traffic alerts, lane departure warnings, and more. These are all meant to keep you informed of any dangers on the path in front of you. Call Brad Deery Honda or contact us via text or email to learn about the 2022 Honda Pilot. Also serving West Burlington, Cedar Rapids, Davenport, and North Liberty Iowa. 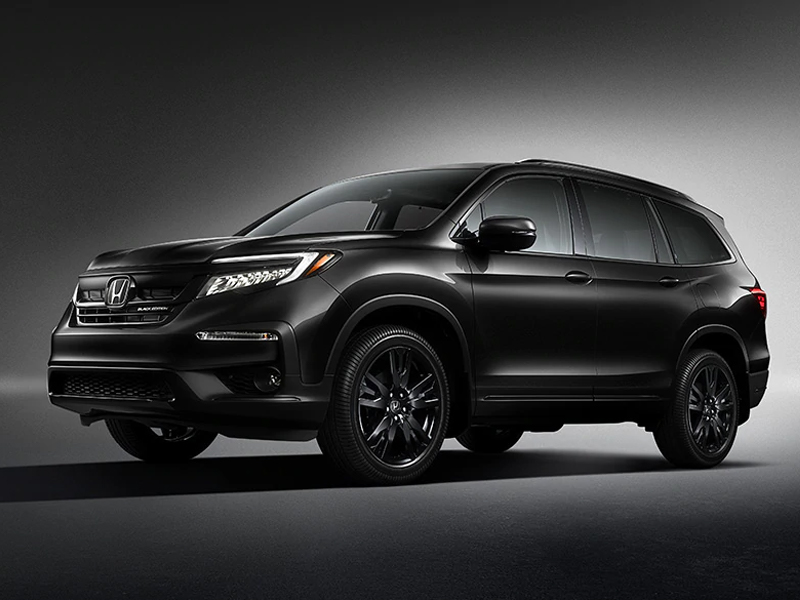 
Honda designed the new Pilot to be the ultimate family vehicle. It has seating for up to eight and a wide range of technology features that everyone will love. You can choose smartphone integration with Apple CarPlay and Android Auto. You can choose a model with a one-touch moonroof, one-touch second-row seats, and a hands-free tailgate. The wireless phone charger allows you to keep your Qi-compatible devices ready when you need them. You can enjoy a 590-Watt premium sound system, LED headlamps with auto-on-off, and heated front and rear seats. Everything about the Honda Pilot was designed for comfort and convenience. It is perfect for long family trips or for zipping around town running errands. The best part is that Honda gives you a wide range of trims and choices. You can build the Pilot to fit your lifestyle and everything that you want to do. The information in this article does not reflect the features and amenities that you will find on any specific vehicle in our inventory. If you see something that you like, be sure to call our friendly staff for information about a specific vehicle. Also serving West Burlington, Washington, Keokuk Iowa, and Galesburg Illinois.